FIRE Steakhouse & Bar on Dawson Street is open for al fresco bookings for patrons to enjoy an award-winning dining experience with customer and staff safety paramount within a controlled friendly environment. FIRE Steakhouse & Bar is celebrating its 15th birthday on Monday, September 28th. Over the past 15 years, FIRE has served in excess of 1 million diners including famous faces such as Archbishop Desmond Tutu, Rory Mcllroy, Bono, President Bill Clinton and Rihanna, to name but a few. The celebrated steakhouse & bar is open and offering unique al fresco dining options on Dublin’s most enviable outdoor terrace overlooking Dawson Street. Following NPHET’s recommendation, the Government advised that all indoor dining was to cease in a bid to further curtail the spread of Covid-19 and to align with guidelines FIRE is making the most out of its fantastic outdoor space as well as launching a cosy outdoor snug.

The team at FIRE quickly adapted to these new restrictions, adding large scale umbrellas, garden heaters, and comfortable, spacious and safe table settings, to add to its already beautiful terrace area. Additionally, FIRE has put the finishing touches on a cosy new outdoor snug, perfect for private dining for groups up to six people. Complete with heaters, cover and freshly laundered, individually wrapped blankets, it is the perfect space to celebrate a special occasion during these remarkable times. To celebrate its 15th birthday, FIRE has some unique offers for both cocktail and steak lovers to enjoy al fresco. The FIRE15 cocktail is a boldly sweet concoction with a touch of bitterness…containing DWD whiskey, Amaro Averna and dark caramel syrup, the cocktail is an embodiment of the maturity of FIRE and the bittersweet times we’re living in. Perfect as pre- or post-dinner cocktail, the bitter is a nod to the restrictions, while the sweet is the fact they are still open. Carnivores can enjoy a new menu addition, the 15oz 35day Dry Aged Hereford Prime Porterhouse Steak. Cooked over open flames and served alongside FIRE’s bone marrow, a choice of fries or baby Caesar salad. To celebrate its 15th Birthday this steak offering comes to a mouth-watering €55.15.

Customers can find out more information about the menu, reservations for outdoor spaces, safety practices and “welcome back protocols” at www.FIREsteakhouse.ie. For the latest updated follow @firesteakhouse on Instagram.

Established in 2015, these awards acknowledge and celebrate the very best restaurants in the world. The awards recognise culinary excellence and memorable experiences in restaurants around the world. The SOLE team were honoured to have taken home this award last year and would love to bring an award home along with their sister restaurant, FIRE this year.

FIRE offers a dining experience in a historical setting. The restaurant itself was originally built in 1864 for the Lord Mayor of Dublin as their ‘Supper Room’. FIRE has recently undergone a €1.1 million stylish refurbishment, which showcases a completely new look for the restaurant. The FIRE Steakhouse & Bar menu has been revamped and now includes more steak cuts than ever before.

Last year, SOLE took home this award and they would be thrilled to win it again! FIRE is celebrating their 15th birthday this month and this award word would be the perfect birthday present for them! Voting is officially open and would love it if all our friends of FIRE and SOLE could take two minutes to vote for us:

The COVID-19 Safety Charter is an initiative endorsed by the Irish Government to reinforce confidence in domestic and overseas visitors in tourism businesses. This is designed to give comfort and reassurance to employees, employers and consumers that FIRE has opened safely. Fáilte Ireland issued guidelines for the Irish tourism and hospitality industry, which is designed to meet the government’s safety guidelines.

What does this COVID-19 Safety Charter mean for FIRE and SOLE?

The FIRE and SOLE teams are delighted to have received this COVID-19 Safety Charter, after implementing their Welcome Back Protocols. They are committed to providing their guests with a safe and comfortable dining experience. 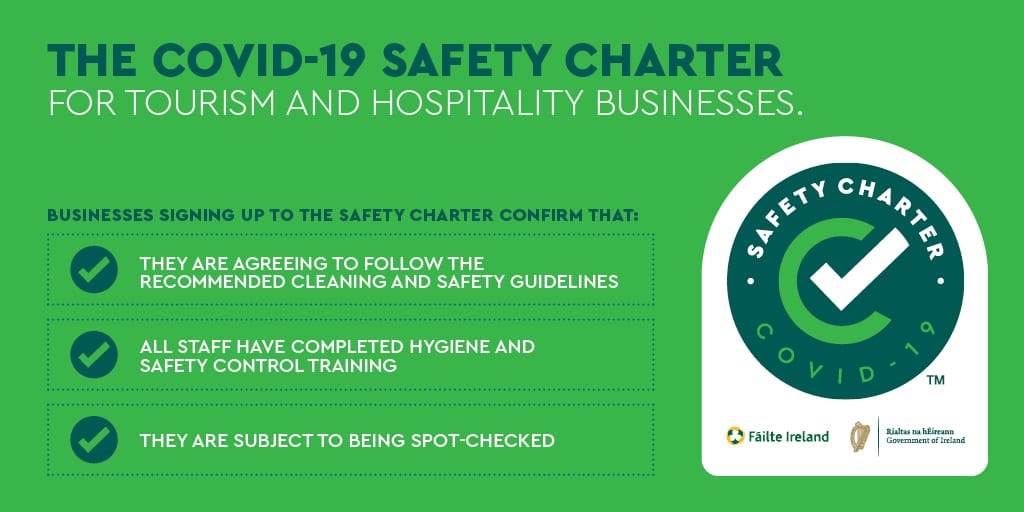 The winning Fillet, which was produced and entered by ABP Cahir Ireland, is a grass-fed Angus cross reared in Limerick.

The steak beat international competition to secure Ireland’s first ever category title in the annual competition.

The award was presented by Chair of the Judges Richie Wilson to ABP Cahir Ireland before an audience of 250 guests in the historic Round Room, Mansion House, Dublin.

It is the first time the World Steak Challenge has been held in Ireland, supported this year by Official Host Partner Bord Bia and venue FIRE Steakhouse & Bar.

It was an incredible night for ABP Cahir Ireland which secured 18 medals in total including six golds, four silver and eight bronze medals.

Aidan Fortune, the editor of Global Meat News which organised the event, said:

“This is Ireland’s first category win in the competition with a real quality steak. This was an extraordinarily close competition and ABP Cahir came very close to the overall winner.”

“It was a remarkably pretty steak. It had a perfect strip of fat running along the edge and was delicately marbled. This was a picture perfect Fillet with all the flavour to back it up.”

“ABP Ireland is delighted to have achieved this great success for our certified Irish Angus Fillet especially given the huge number of entries. We supply this premium steak to  retail and food service customers in Ireland and Europe. The win is even more special given this is the first time the competition has been held in Ireland.”

It was Finland who secured the overall championship title of ‘World’s Best Steak’ for a second year running with a grass fed Rib Eye produced by JN Meat International of Denmark.

But Ireland delivered yet another strong performance, with 15 other producers winning a record total of 75 medals.

Silver and bronze medals went to the Redmond Family Farm, which took silver for a grass fed Rib Eye Angus cross raised in Craanford, Wexford. The farm also won bronze for a grass fed Sirloin. Both steaks are served at the Ashdown Park Hotel, Wexford. This is the first year the farm has entered the competition.

The other winning Irish producers are: